Last year I created a four seasons unit where we made a poster describing what we see, feel, wear, and smell in each season.   I used it for my early language learners in general education classes as well when pushing in to the self-contained autism classes.  It would also work well for preschoolers.   It’s very versatile for various ability levels and language targets, and has become a popular freebie in my TPT store.  Several people asked for a visual of the finished product, so here you go! 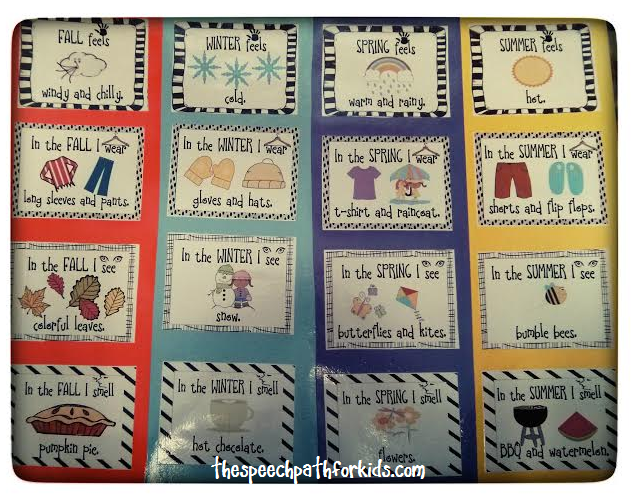 Describing what we wear, feel, see, smell in each season

I differentiated this activity based on the various needs of my students.

(Note: I found it easier to work with four strips of paper – either vertical or horizontal instead of assembling 16 different squares together.  You can adapt it to make it work for you though…be creative!)

Students can use pictures or write to express their likes

Each student will be able to make a choice of their favorite season and provide supporting reasons using the choice strips.  Some students did this verbally, others completed the written version first. 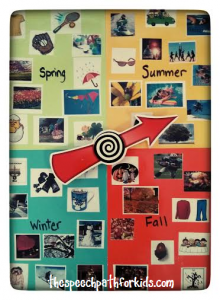 When doing the four seasons unit, I also use this poster with my spinner.  The kids love using the spinner!  There are many ways to use this game…a few ideas include:

You can find this set of 3 magnetic spinners through educational catalogs or on Amazon. They are awesome!  I use them on my board when I’m in my room, or with a cookie sheet behind the poster when I am traveling.  If you don’t have a spinner you could put a number in each corner and roll the dice to choose the season.  Or you could make a dice with colors on each side (corresponding to the four colors of the poster).  To make the poster, I just taped four pieces of construction paper together to make a larger poster (I wanted the four colors to make a distinct separation between the four seasons).  Then I used pictures from Google images and Boardmaker.

While we are on the subject of the four seasons, I have two examples to share with you of bulletin board sized anchor charts that I use in my room.

I use the “Garden of Time” as a visual reference of how time starts out smaller in days, and grows into weeks, months, and seasons. 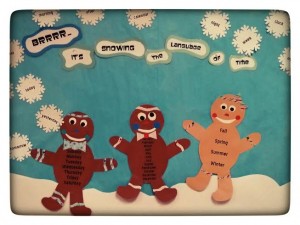 Brrr ~ frozen with the language of time

I changed the presentation up a little when the weather turned cooler.  Next up I’m going to put some penguins on my snowy hills.  I really liked having pictures depicting the seasons, so I’m going to find a way to incorporate that again.  I am ALWAYS talking about the language of time…days, months, seasons, before, after, day, night, when, first, last, etc!  I found that having this information visually represented in my room was a helpful resource.  It is right behind where I generally sit, and I use it frequently, so I often point to the visuals without even needing to turn around and look!

I’d love to hear your ideas when it comes to teaching the language of time or the four seasons!  Thanks for stopping by!

2 Responses to The Four Seasons

This site uses Akismet to reduce spam. Learn how your comment data is processed.