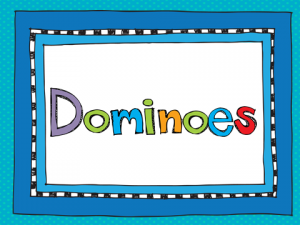 So it started out simple enough.  A couple of years ago I made a quick and fun game of dominoes for my students.  At the time, I really needed activities for my students working on /s/ and /r/ (particularly vocalic R) so those were the sounds I used for this game.  Over time, I found many opportunities to use this game with students focusing on other sounds. There was only one catch – the different sound cards were still in my head!  What started out as a few tiles of dominoes turned into 23 different sound sets using (mainly) 24 words each with sorting mats, writing templates, and spelling sorts.  I created one sound set then needed another, and another, and another – very much a domino effect! 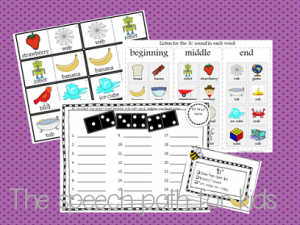 My school system uses Twomey’s early, middle, late 8 developmental sound chart.  I organized these dominoes into three sets using the early, middle, and late format.  Each sound stands alone as its own game and has sorting mats, writing templates, and 24 domino tiles (8 each of initial, medial, and final sounds) – except where noted.  Some sounds (I’m talking to you “y” and “ng”) were not very accommodating for my organizational system!  The beauty of this game is your group can all be involved in the same activity, but you can differentiate it based on student needs, target sounds, and goals. 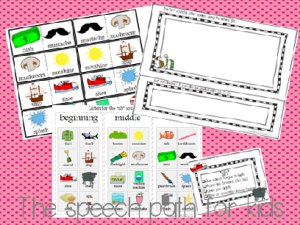 I’ve also included templates for students to copy/write the words in groups based on the spelling of that sound.  While I certainly don’t teach spelling and all of the associated rules and patterns, I do find it helpful that my students are aware of alternative spelling when they are expected to read and write words with their target sounds. When they see the word “ocean”, they need to be aware of what sound they are expected to make and not be fooled by the spelling. 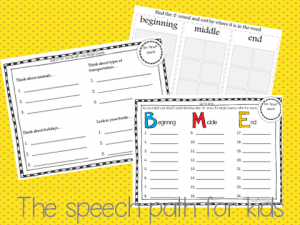 Each sound has a sorting mat to sort the pictures or pictures & word into groups of beginning, middle, or end.  This is a skill that my students are always practicing in class so I find it helpful to connect it to their articulation practice as well.  I also like for them to generate words with their target sounds, so there are templates for category sound searches. 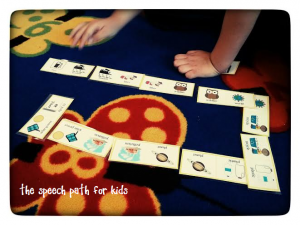 My students LOVE playing dominoes.  They have many opportunities as I have them incorporated into many of my story companions and thematic materials.  With this set of early, middle, late 8 sounds, now I am prepared (with at least one game!) for any IEP sound goals that comes my way – typical or uncommon.  I also find that these are easy to send home with students to make a poster or play a game of dominoes with their family. (I send home a b/w copy because they love to color and cut them out)

This site uses Akismet to reduce spam. Learn how your comment data is processed.